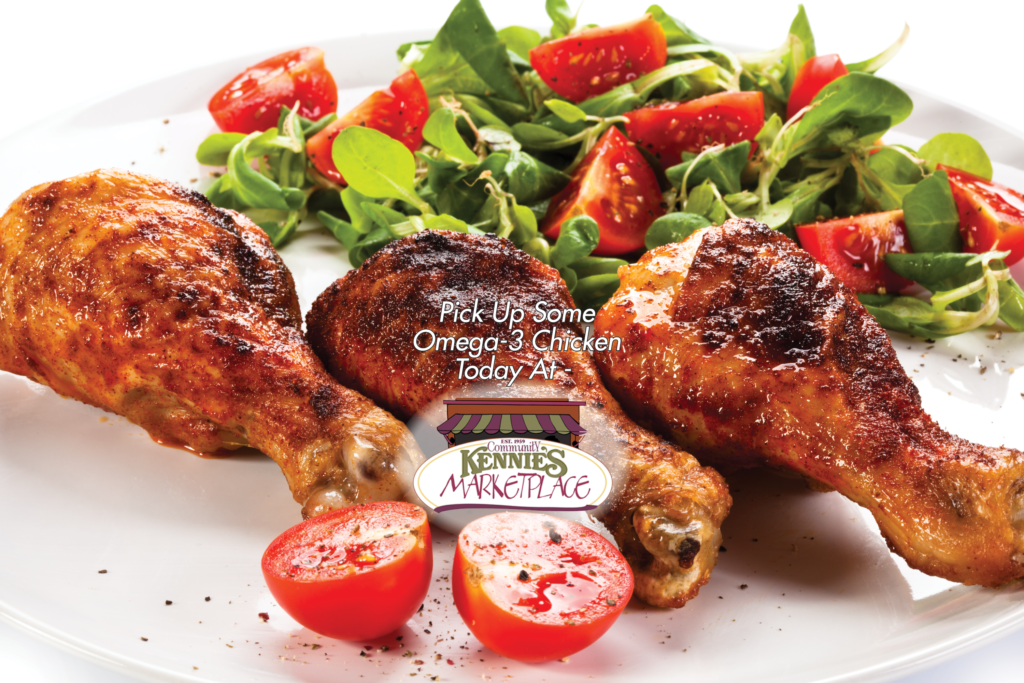 GIVE YOUR HEART, BRAIN, JOINTS & EYES SOME HELP WITH OUR OMEGA-3 CHICKEN

Get Some Omega-3 Chicken Today at Kennie’s Market

Check out what Dr. Oz says about us!

Murray’s Chickens are raised in the rolling hills of Southeastern Pennsylvania. The birds are processed just over the New York state line in the Catskill Mountain region of Sullivan County.

IQ Chicken uses a unique blend of natural ingredients for our birds’ diet. This diet reduces Omega-6 and increases Omega-3 intake in the most popular protein consumed in North America, chicken.

Suck it, salmon: Chicken’s coming for your nutritional crown.
The resulting “IQ” chicken, so named for omega-3’s purported brain-boosting abilities, boasts about 1,300 milligrams of the fatty acid in its skin-on thigh meat (traditionally the most omega-rich cut of the bird). That’s significantly more than the 150-ish milligrams in normal chicken thighs, and on a par with the 2,000 or so milligrams found in a similar-sized serving of salmon.

Are you getting sick of your everyday eats and want to try something else? Trust me, we’ve all been there and I can seriously relate to this food crisis. Every week, I have the same three meals, and am always looking for a new meal to spice it up. Is the chicken you’ve been eating “sketchy” or not how you like it? You probably need omega-3 IQ chicken.
If you’re like me and want to try something new for your daily meals, then Murray’s Omega 3 IQ-Chicken is right up your ally. Filled with a ton of nutrients and benefits, you can never go wrong with this up-and-coming chicken brand. Omega 3 IQ has a ton of benefits compared to unhealthy, mild, and meaty chicken brands. If you’re in your apartment and want to prepare a quick meal, Murray’s Chicken does the job.

When people talk about the good fats, they’re often referring to omega-3 fatty acids. While we usually look to fish as a primary source of these healthy fats, Murray’s chicken now makes thighs, breasts, drumsticks, legs and wings with naturally occurring omega-3s.
Your body needs these healthy fats to function, and they’re known for a ton of health benefits like fighting depression and anxiety, improving your eye health, reducing inflammation, alleviating menstrual pain, improving sleep quality and preventing acne.
These chickens are the first in the industry to be given the Certified Humane label, and they’re fed an all-vegetarian flax seed-based diet, along with multi-vitamins, so the protein itself is naturally packed with omega-3 fatty acids.

Omega-3 fatty acids have received mass coverage in the last decade as an important “super-food” to incorporate in our diets, but what about adding secondary sources of these healthy fats to other foods?
Murray’s Chicken, the first in their industry to be granted the “Certified Humane” label, is now breaking ground with their latest endeavor—Omega-3 enriched poultry called “Nature’s IQ Chicken.” Murray’s worked with the local farmers who source their chicken to supplement their diets with plant-based sources of omega-3s, like flax seed.
“Nature’s IQ” recently gained attention after Dr. Mehmet Oz chose to investigate Murray’s Chicken and their enriched poultry, along with food journalist Mark Schatzker.

The Omega Menu
Diet change may be showing results in student behavior
BENTON HARBOR, MI – Eating healthier food not only helps the body, but the brain.
Students at the Alternative Education Center at Sorter School are calmer and more focused now that they are eating the right food, said Lynn Todman, a research affiliate in the department of urban studies and planning with the Massachusetts Institute of Technology.
She coordinated an eight-week program that started April 13 in which students are served a breakfast and lunch each school day that is high in omega-3 fatty acids, which are critical to brain health. Omega-3 can be found naturally in salmon, flax seed and walnuts.
She said teachers told her they have started to see a difference.
“One teacher said he noticed aggression levels go down three weeks into the program, and it’s making his job easier,” she said.
Todman said American diets tend to be heavy in omega-6 fatty acids, which are found in corn oil. It’s not that omega-6 fatty acids are bad, but she said there needs to be a balance.

“Nutritional Armor”
Military interest in omega-3 is nothing new, with the November 2014 edition of Military Medicine focusing on the fatty acids as “nutritional armor”.
Interest has focused on several different endpoints, including improving mood and reducing suicide rates among serving and ex-military personnel, speeding recovery from traumatic brain injury, and improving reaction times of fighter pilots.
A recent study published in the Journal of Affective Disorders , for example, found that omega-3s may benefit people suffering from post-traumatic stress disorder (PTSD), which is known to produce psychophysiological symptoms such as a pounding heart.
An expert panel convened at the Nutritional Armor for the Warfighter Conference, jointly hosted by the Samueli Institute through the Metabolic Defense Program and National Institute on Alcohol Abuse and Alcoholism, concluded: “[B]ased on studies analyzing omega-3 and omega-6 FA balance, it would be unethical to not attempt elevating the omega-3 status among U.S. military personnel.”